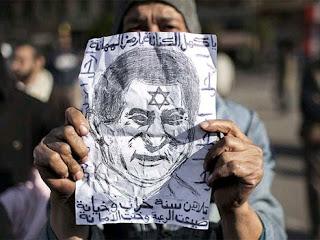 Posted by malatesta at 14:21 No comments:

I could be wrong

Of course I could be all wrong. And not for the first time.

For me, Obama and Clinton are beginning to sound as weak and indecisive as Carter when the Iranian revolution started. They still believe in Mubarak but they threaten to reconsider a $1.5 billion programme of foreign aid if Mubarak does not respect the rights of his citizens.
And what do his citizens want? They do not want concessions, they want his head.
So the U.S. is saying, we support you President Mubarak, but we will reduce our aid to an already failing economy if you do not let the demonstrators overthrow you.
By the way, all the demonstrators are not only anti-Mubarak. There are two other things that the Islamists and the Internet generation agree upon. They are against America and the Zionist "project/entity".

Egypt is not Tunisia.
Since independence Tunisia has been ruled by secular despots and there is quite a large middle class. It is actually one of the most advanced Arab countries.They could elect a secular or moderate islamic government. Also Tunisia is not important for regional or world politics.

Egypt is really backward. Look at the Pew percentages. They are e.g. much worse than Lebanon (and Hezbollah). 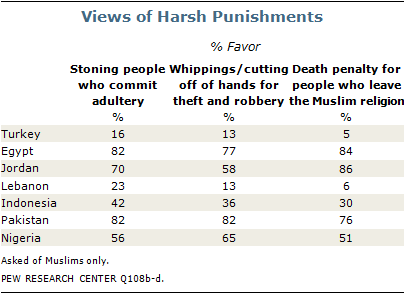 Egypt is home to the Muslim Brotherhood. This is the mother/father (can't really say mother) of all the extremist Islamic groups in the region. Hamas is an offshoot of the Muslim Brotherhood.
Egypt was and is the largest and most important Arab country and it controls the Suez Canal. Actually I loved Egypt when I read The Alexandria Quartet by Lawrence Durrell. Justine and Balthazar are my favourite books. Then I went there on holiday and changed my opinion.
A Sunni Islamic republic is a disaster for American foreign policy in the region. What will happen to king Abdullah in Jordan and the PLO? I would not bet on their chances of survival.

With all respect. I sometimes think that Americans are a bit naive about spreading democracy. For them it seems to be only about the rule of 50% plus one. Obama and Clinton are happy, they smell the scent of democracy.
Don't hold your breath.
Posted by malatesta at 17:33 No comments:

From Cambodia to Egypt

Remember Cambodia. The gallant struggle against the imperialist Americans. They were fighting the devil, so they had to be angels. Marching in support of the Khmer Rouge was a privilege. And then it all turned sour with the "killing fields". Of course no-one can blame us, how could we have known?
Actually we could have known, if we had bothered to look at the Khmer Rouge's ideology beforehand. We could have also investigated the warnings. Instead of just dismissing them as imperialist lies.

Remember Iran, the revolution. I was studying Politics at the University of Amsterdam. The Marxists (of many different plumage) were ecstatic. Marx had predicted this, the prelude to a socialist Middle East.
There were once again warnings, but they were again dismissed. Lies spread by imperialists and the new devils, the Zionists.

Remember Egypt. You should, it is today. The people are rising up, just like in Tunisia. The people want democracy. A new wind of liberty is blowing in the Arab world.
Or is it?
Here comes the warning. The only reliable information we have on how Muslim Egyptians think comes from a Pew Research Center poll on harsh punishments:

82% favour stoning women who commit adultery;
77% favour whippings/cutting off hands for theft and robbery;
84% favour the death penalty for people who leave the Muslim religion.

I find these percentages pretty chilling. But nobody needs to listen. I am just another imperialist and Zionist.

Posted by malatesta at 15:20 No comments: