In a war people get killed. That is why we do not like wars.
In the past, the western countries were not as civilized as today. They accepted these deaths.

Nowadays, the civilized western world does not accept body bags any more.
Diplomacy, give and take, understanding and finding the “real” reasons for conflicts have become the new paradigms.
Clausewitz with his "War is the continuation of politics by other means", is definitely not done.
Singing “Give Peace a Chance” around the campfire whilst holding hands is the new vogue.
The goals and values of “mothers” have replaced the primitive, macho behaviour of male savages.

It helps that no country is attacking the western world. And if the west does decide to go to war, it uses others to do the fighting, like the Kurds in Syria and Iraq.

In Israel it is different. The country is surrounded by enemies who want to destroy it.
Hamas, the enemy in the Gaza Strip, even calls for the slaughter of the entire world’s Jews in language reminiscent of the Nazis.
Israel’s enemies do not mind body bags. In fact their willingness to be killed is their strongest weapon.

Years ago, Moshe Dayan said that “Israel must be seen as a mad dog, too dangerous to bother.”
Times have changed. Israel may be in the Middle East, but in values it is part of the civilized western world.

Israel is no longer too dangerous to bother.
It constantly warns Hamas, but Hamas keeps on attacking with rockets, flaming balloons and kites. Israel replies with the destruction of real estate in the Gaza Strip.
When Hamas decides to stop, it calls for a ceasefire and Israel agrees.

This civilized response is what the western world expects from Israel.
When Hamas has replenished its stock of rockets it attacks again. The success of Hamas also emboldens Hezbollah and Iran.

Is this civilized Israeli policy, appeasement or “Realpolitik”?  We will find out in the future.
My personal opinion?
Bring back Dayan’s mad dog. 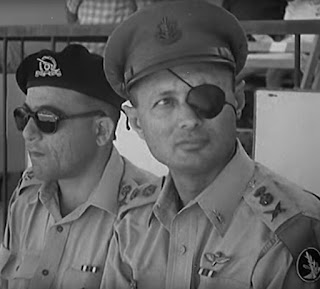 Posted by malatesta at 16:43 No comments: