I like to predict the future.
Actually I am pretty good at it. When I lived in the Negev, most of my weather forecasts were correct.

My attention is now focused on the follow-up to the excesses of MeToo. I do not mean the exposure of the misuse of power for sex.
I am referring to the sexual McCarthyism.

Historically speaking, hatred, bigotry and the dumbing-down of public discourse are an inherent part of American culture.
However, the specific context for these activities is subject to change.

I predict a central role for Valerie Solanas in the follow-up to the excesses of MeToo. I know she is dead, but I see her as a symbol for the future.
Not because she tried to murder Andy Warhol fifty years ago. Nobody cares about that now.
There are five other reasons that make me think she will appeal to a future generation of gullible, hysterical cretins.

·       She was a trailblazer in foul-mouthing.  In her time it was not usual for women to use variations of “fuck” in every sentence. She did, and in that sense can be considered quite modern.

·       She suffered from chronic paranoid schizophrenia. A true victim of patriarchy.

·       She started an organization called SCUM in 1967, an acronym for Society for Cutting Up Men.
In her SCUM manifesto she calls for the elimination of all men.
Well, why not if they are the cause of all evil?

·       She was obnoxious and obsessive. A bit like Linda Sarsour.
In 1968 she was sentenced to three years in the New York State Prison for Women for trying to murder Warhol. After her release in 1971, she stalked Warhol and others over the phone.
This led to her being arrested again. After this release, she was institutionalized several times before she faded out of the public eye.
A true victim of institutional misogyny and paternalism.

·       She was openly lesbian in a time that it was not acceptable.
More than that, she challenged the idea that gender is binary, as well as the accepted norms of sexuality and performative gender. This makes her acceptable to the queer community.

I see a future coalition of the followers of Valerie Solanas and the growing army of transgenders.
Of course I cannot see all the details in my crystal ball.
For example, I cannot see if all male foetuses will be aborted in the womb or if some men will be kept on sperm farms.

Getting back to the Negev.
I predict sun for tomorrow. 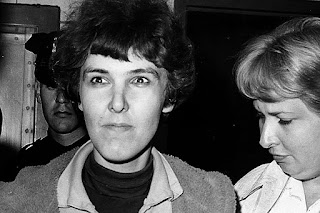 Posted by malatesta at 11:04 No comments: