The pioneers of the New Yishuv worked from dawn to dusk. It was daily, back-breaking, physical labour. To survive there was a rigid work ethic. Not much time for folk songs and dancing the hora.
The following historical story is an excerpt from my cousin Beni's blog post, "The Ploughman". It is about this work ethic.

“In October or November 1911 a number of plough teams were ploughing a field. The field was the longest field in the country; it stretched for one kilometer close to the south bank of the river Jordan. It was part of an experimental land allotment allocated to thirteen people who had formed a collective settlement called Degania.
The horse drawn ploughs were turning perfectly straight furrows in the soil. Work had started shortly after dawn and continued with a short break for a simple lunch till dusk.
One of the ploughmen was a newcomer to Degania. In those days there were no reception committees and people wandered in and out almost at will. They stayed as long as they worked or were asked to leave.
Earlier the same year the Degania settlers had harvested their first crop of wheat. The yield was good and it left them with a small profit. Had the crop failed the group would have disbanded and the collective settlement later called the kibbutz may have never come into being.
Late in the afternoon the newcomer reined in his horse, pulled out a leather tobacco pouch, took a pinch of tobacco and rolled a cigarette. He lit the cigarette and smoked it, then returned to his work.
Unknown to him he had broken a cardinal rule, a basic tenet of the group’s work ethic and the unscheduled break had been seen by everyone in the field.
At the end of the day when everyone had gathered in the dining room for the evening meal the group was silent. There was no mention of the cigarette but the offender could sense the unspoken censure.
The next morning before dawn, while the members of the group were still sleeping, the newcomer gathered his belongings and left.” 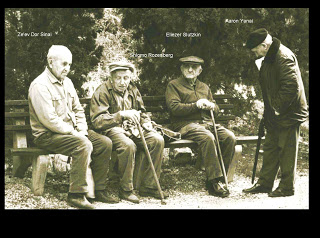