A big, small story: the synagogue of Aalten

Aalten is a small municipality and village in the east of the Netherlands that extends to the German border.
It is a charming area with well-kept houses and plenty of walking and cycle paths. People still greet strangers there.

Not all Jews in the Netherlands lived in the big cities. There were small groups living throughout the country.
Jews first arrived in Aalten and the neighbouring village of Bredevoort in the 17th century.
In 1850 a small synagogue was built on the main street of Aalten.

In 1930, an estimated 70 Jews lived in the village. After Hitler’s rise to power, their number was augmented with German Jewish refugees.

During World War II, 51 of Aalten's 85 Jews were hidden by local non-Jews, and thereby survived the war.
The hidden Jews were supported by money collected from the congregation of the local Dutch Reformed church.
Religious books and ritual objects of the synagogue were hidden by the local population for the duration of the war. The building itself was ransacked.

The village had proportionally the highest number of people in hiding during World War II. At one point, Aalten hid 2,500 Aalten Jews, German Jews and non-Jews, amidst its population of 13,000.

After the war, most of the Jewish survivors left; too few remained to keep up the synagogue. For decades nothing was done with the building.

In the early 1980s there were discussions in the municipality about selling the building.
This led to an initiative by a small group of Aalteners to restore the synagogue and use it for Jewish services and as a memorial for their murdered Jewish neighbours.
The group established a foundation called, “Friends of the Aalten synagogue”.
And here begins my connection to the story. One of the initiators was the father of my son-in-law.

The initiative was successful. Contributions came from the congregation of the local Dutch Reformed church and the municipality and province.
In 1986, the synagogue was again consecrated and it started its new life as a house for both religious and cultural functions.

In December, 2000, during the celebration of the 150th anniversary of the synagogue, a plaque bearing the names of the Jews of Aalten who were murdered in the Holocaust was unveiled on the wall of the synagogue.

A new Torah scroll, written in Israel by Joseph Giat, was dedicated in 2005. As less than ten Jews now live in Aalten, the scroll is mainly used in the larger municipality of Enschede. 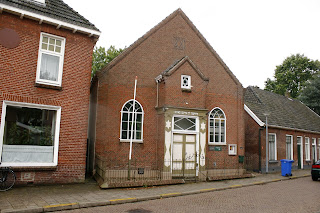 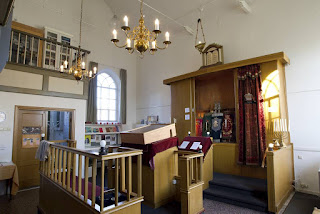